must be expanded into carefully designed shapes:

One begins by cutting the four shapes out: 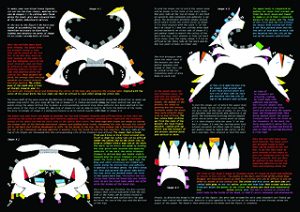 The four shapes cut out, incisions are made in shapes 1-3 by cutting along the black, grey and coloured lines at the points indicated by arrows. As the key to the figure is its back and rump, in assembling the figure, it is necessary to start here, folding and bending the arms of the „x“ shape to create curving belts of form. Once the red tabs have been bent inwards, the lower arms are brought round so that they can be joined at the red line. To do this they must be bent inwards at the edges to give the buldging curve of the lower stomach, and can then be affixed to one another by applying adhesive to the red tabs and aligning along the central line. Once securely affixed, the orange tabs sticking upwards are turned inwards and adhesive applied. The yellow area of the right arm is folded sharply inwards and the two arms are brought down and following the curves of the hips, are joined to the orange tabs. Aligned with the curve of the lower form, the two ends can be affixed to each other along the yellow line. The upper legs and knees are made by pushing the two red triangles inwards and affixing them so that they are covered by the areas to which they were hitherto adjacent. These bluntly pointed forms represent the foreward buldge of the upper leg and the outer side of the lightly bent knees. The knee-caps and thighs are made by taking the orange tabs at the bottom outermost corners and pulling them round, threading the tabs through the central slit at the back and folding downward to affix. On the inside of the legs, the thin orange tab is threaded through the slit in the triangular tab and adhesive is applied from the inside to join the two together. The grey tabs at the top of the thighs are then threaded into the corresponding slits of the stomach and are affixed. The shape that extends from each knee is then rolled around onto itself so that the yellow tab can be affixed under the yellow line on the other side, to form a cylinder with a blue tab at the back. The backs of the knees are made by folding the four green tabs inwards and applying adhesive. At the back, the white triangles formed by the dotted lines, are folded lightly inwards and the green triangles pushed under the form of the upper back legs. The blue and white extensions are folded outwards along the dotted lines and adhesive is applied to the blue areas. The white areas are then placed over the green tabs whilst the blue areas are pushed under the form of the upper back legs. Thereafter the two circles that finish the lower legs are folded over, as are the violet tabs, which are affixed to the insides of the lower legs. To join the shape out of which the upper body will be made to the form of the lower body, the grey tabs of shape #1 are folded upwards and outwards and adhesive is applied. The thin triangles that form the inner sides of the breasts are then pulled upwards and round so that they can be joined to the two remaining pairs of grey tabs on each side.

At the point where the two triangles meet, the red tabs are glued to one another. As with the thighs, the buldge of the breasts are made by pushing the two orange triangles under the areas they were hitherto adjacent to and affixing. The upper body is completed by pulling the shape that extends up from the back, down and round to make a circle that is joined by means of the green tab.  The front of this circle and the two triangular shapes that extend out from it are then pushed down and the two sets of blue tabs on each side are inserted into the slits at the top of the breasts and affixed. The sides of the shoulders are formed by coating the violet tabs with adhesive and pulling the crescent shapes that jut out at each side, forward and down onto the square tabs, the triangular tabs then being pushed under the larger triangles that form the front of the shoulders. At the back, the form immediately below this crescent is then pushed out from inside so that the overlap becomes a crisp edge. The form of the head is made by bending shape #4 round on itself and affixing by means of the red tab.  The points at the back and front of the crown thus formed are then bent down so that they overlap and can be affixed to one another by means of the orange tab. The yellow and blue areas on each side are coated with adhesive, as are the yellow, green and blue tabs that extend outwards from just below the points of the crown. The points are then bent downwards and affixed in the order yellow, green, blue. The face is formed by joining the violet tabs to the inside of the head so that it curves outwards and down. Finally, to attach the head to the body of the figure, the grey tabs around the neck and shoulders are folded upwards and coated with adhesive. Adhesive is also applied to the bottom of the head in a thin thread, along the edges of the paper. The head is then attached to the body and the figure is complete. The result is nothing other than a stylised version of the world famous „Venus of Willendorf“. This 11 centimetre (4 3/4“) high limestone figurine was found on the 7th August, 1908, in the small village of Willendorf, in the Wachau Valley of Austria. 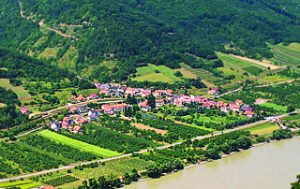 The approximately 30.000 year old figurine is displayed in Room 11 of the Natural History Museum in Vienna and is an outstanding example of the female statuettes which typify what archaeologists call „Gravettian culture“. This once stretched from Pyrnees to Siberia, with many examples being found in France and Russia. Traces of ochre indicate that the Venus of Willendorf was originally painted red and this is generally accepted as an indication of ritual use.

At Reloading Humanism this renowned figurine is seen as standing for the diagnosed need for a new conception of what a human being is and can be – a conception that whilst drawing inspiration from the Renaissance view of man, is also informed by the insights of evolution, neurobiology and the anthropology of human origins. At Reloading Humanism the conviction is that whilst we should not over estimate our abilities, it is high time to do away with the modern cult of perpetually doing ourselves down and contributing to a culture that denies us the possibility of being able to change things for the better.