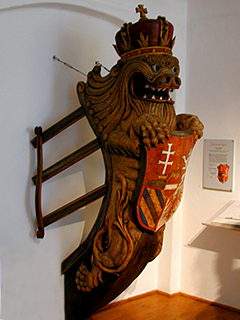 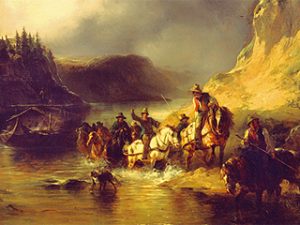 Prior to the introduction of steam shipping on the Danube, conveys of barges were laboriously hauled upstream by Schiffersleute or „boatmen“, who worked in teams that involved up to a hundred people and as many horses. The towpath was anything other than extensive and permanent and most of the time, there were long stretches where there was no path and only a treacherous patchwork of ox-bow lakes, bogs and wet-patches. At the front of a convey there would be a lone figure mounted on a horse, who with a pole would endeavour to sound out the way ahead. Sometimes all that one saw of the Wagehals or „daredevil“, was the head of his horse and the head and shoulders of the rider. 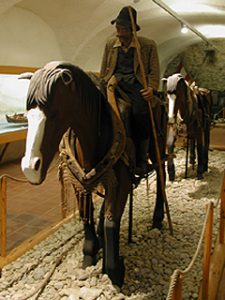 The horses were shire horses and were arranged in pairs, with each pair having a driver who rode on one of the horses. Apart from being strong, the horses specially trained so as to be able to jump into barges, wade through water and not to get themselves caught in the 60 metre long hawsers that they pulled. A convey typically consisted of three freight barges, in front of which there were smaller boats, with short stubby masts and it was over the masts of these vessels, that the tow-rope was hung. This was so as to prevent the tow-rope from touching the water. Where at sea, the dried salt was enough to prevent ropes and cordage from rotting, inland, fresh water quickly rotted ropes made from natural fibres. The overriding imperative was therefore to never allow the tow-rope to get wet. After the freight barges, the last vessels of a convey were the supply ship, followed by a galley boat where cooks worked hard to cater for the crews and riders. Conveys were often 500 Metres long and for the 450 Kilometre journey from Vienna to Regensburg, between six and eight weeks were needed. Starting and stopping a convey was slow and time-consuming process and when it was necessary to change over from one bank to the other, the operation would take a whole day. The village of Rossatz, which lies opposite Dürnstein, is so named as a little further upstream, there is a sharp bend in the river that cannot be negotiated on the inside by a convey of vessels going upstream. 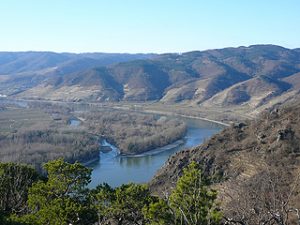 The bend is however wide and was shallow enough to vessels and horses to be moved across from one side to the other. From the merging together of the words Ross for „horse“ (or Rösse for „horses“) and umsetzen, to „change over“, the name „Rossatz“ emereged as the name of the village near where this was done. Meanwhile the passage downstream was a process of controlled drifting achieved through the use oars. During the first half of the nineteenth century, some 850 barges were floated downstream to Vienna every year while only 350 were pulled upstream. This is because the costs of a convey were such that barges were seen as being semi-disposable and empty barges were never pulled upstream. 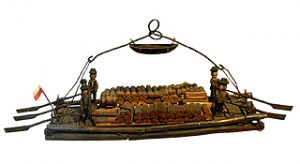 A model of a raft in Museum Krems

Wherever possible rafts were used and  large timbers were transported on rafts that were made using the timbers to be transported. Conveys were captained by „ship masters“, who acted as entrepreneurs‘ and managed trafficking operations along the Danube. One ship master, Matthias Feldmüller from Ybbs, would sometimes build 40 barges a year and at peak times, would employ 250 people and have 150 horses in use. In the Wachau, a ship master’s house and office can be seen, overlooking the river, at the upstream end of Spitz. 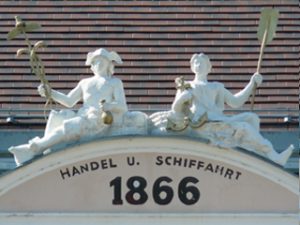 Where barges were semi-disposable and human hands were hired, a ship master’s capital costs lay in his horses. On long journeys, horses were changed and were ferried about in Zillen. These are long, narrow punts with pointed ends. Still in use today, in close quarters they are paddled but are otherwise pushed through the water by means of long poles. 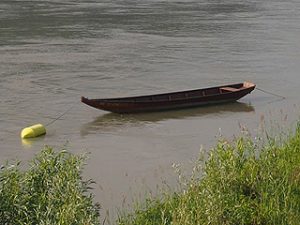 The various kinds of vessels used by the shippers were built at a number of towns along the Danube with there being a large naval shipyard at Klosterneuburg. On 14th April, 1768 in the presence of Empress Maria Theresia and co-regent Joseph II, this was where the frigate „Theresia“ was launched. Twenty-six metres in length, this was the last sailing warship on the Danube built and the figurehead of the ship is on display at The Museum of Shipping in Spitz. Also displayed is a 1:20 scale cut away model of the vessel which in 2000, won the International Model Ship Competition. 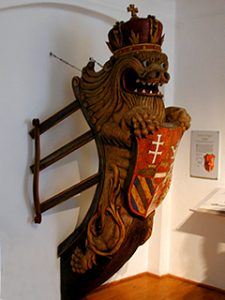 Clearly sign posted and housed in a Baroque palace, The Museum of Shipping is open daily from the beginning of April up until the end of October from 10.00 a.m. to 4.00 p.m. 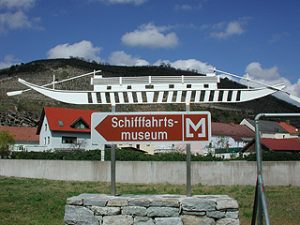 In addition to shipbuilders, along the Danube, there were saddle-makers, rope-makers, carpenters and people who would help with loading and unloading. During the winter months, there was no shipping and the shippers would either return to their wives or hole up with colleagues in a town by the river. Gregarious, the shippers would spend their time in taverns and would work on preparations for the carnival that concluded the winter period. For some, the word „carnival“ derives from the Latin, vale carne, announcing the arrival of Lent with a bidding farewell to the eating of meat. Yet for others, it derives from, carrus navalis and refers to the „ship-cart“ or float that, followed by a procession of boatmen dressed as fools, would be pulled through the streets when the ice and snow of winter began to thaw, heralding the time when the shippers could once again take to the river. Among women, the advice was „Never marry a shipper, in the summer you’ll have no husband, in the winter you’ll have no money“. In Stein, Christine Emberger  offers a tour through the town, dressed in the role of the Nineteenth Century shipper, Jacob, with this being an excellent way of experiencing the lost world of river transport on the Danube, that complments and expands upon what may be seen and learnt in the Shipping Museum at Spitz.

In 1829, „The First Royal and Imperially Warranted Danube Steamship Company“ was formed and in 1830, the first steamship set out from Vienna, arriving in Budapest 14 hours later. Although the return journey took 48 hours, the trip was a sensation and was considered such a success that a regular service was quickly established. From the 1850’ies onwards, the demands for steamships and faster travel lead to nearly all Austrian reaches of the once meandering Danube being straightened out, with rapids and cataracts being dredged and outcrops of rock being blasted away. 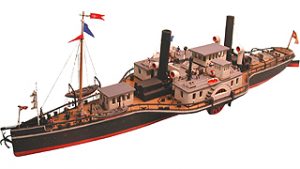 A model of the diesel powered paddle steamer, „Persenbeug“ at the Shipping Museum in Spitz. Launched in 1923, the Persenbeug had a number of sister ships including the „Krems“

Where the first steamships carried people, by the 1870’ies, the river was straightened and regulated enough for steam-powered freight shipping to undermine traditional barge transport and thousands of boatmen were deprived of their livelihood. To keep the newly regulated reaches navigable, ships would drag specially constructed ploughs along the bed of the river.

With the introduction of the internal combustion engine, the amount of people required to operate a ship was further reduced and freight ships are now manned by two or three people conveying an amount of cargo that is comparable to and often exceeds, the tonnage that was carried by a traditional horse drawn convey of three barges and a hundred men. 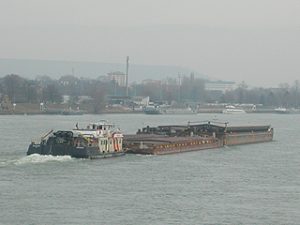 At the Shipping Museum in Spitz, models, life-size replicas and all manner of period artefacts bring the lost world of the shippers to life. At both Spitz and Weissenkirchen there are ferries which, attached to a hawser that is strung across the river, plies its way back and forth by virtue of the current which pushes the ferry across the river when the rudder is turned hard over. 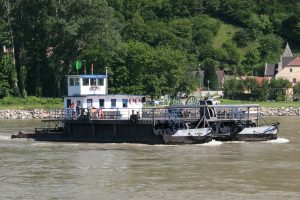 A long lost feature of the Danube were the floating mills that, secured permanently to the river bank, were powered by the current. 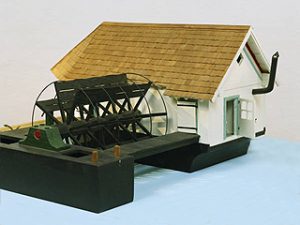 These required a permit as did the activity of panning for gold and a chalice tht may be seen at the monastery in Melk was made from gold that had been panned on the banks of the Danube. 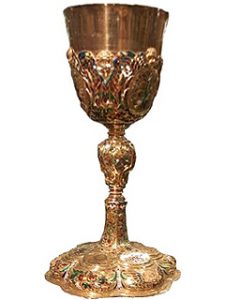 Along the Austrian reaches of the river, only the Wachau was able to retain its age-old appearance. Yet in the 1970’ies, even this short stretch was threatened by plans for a hydroelectric power station and it took a local initiative to prevent what is now a UNESCO World Heritage Site from being flooded. 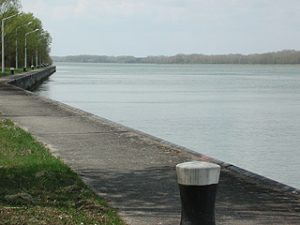 A view of the Danube just above the dam at Greifenstein, a short way down river from Krems

Hidden among the displays at the Shipping Museum in Spitz, an unpretentious model gets to the heart of the matter. This shows how further downstream, in an area on the Serbian-Romanian border known as The Iron Gates, the Romans carved a path into the rock which was then extended outwards with beams of wood. This was so as to made a road, known as Trajan’s Road, along which teams of slaves would haul ships upstream. 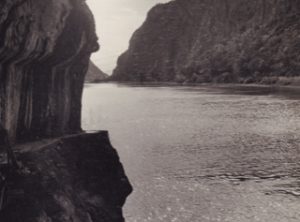 Following the building of a hydroelectric plant the road now lies under 30 metres of water. The heavily regulated Danube thus stands as a reminder not only of how mechanisation has successively erroded the position of the human worker in society but also as an image of the modern world and its relation to the environment. On the map this can be seen in the numerous ox-bow lakes which show the extent to which the river was once free to meander this way and that. 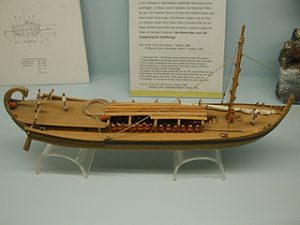