Humanese follows a European system of grammar with nouns being declined in cases and verbs being conjugated according to subject in various tenses. A significant feature of the language is the way that the genitive case is used. This on the one hand emphasises the subject as an agent, who although in the world is nevertheless separated from it through by virtue of being a subject and not an object. On the other hand the concept of subjects possessing or owning physical things in the world is reduced to the limbs and organs of a subject’s body. Thus the hands, feet, heart and head, et cetera of a subject are denoted as belonging to the subject by means of the genitive case in the normal way. Likewise everything that a subject thinks, feels and apprehends also belongs to the subject in the same way and this is again denoted through the use of the genitive. Objects such as tables, chairs and even clothes and toothbrushes are however described as being „for“ the subject concerned. In the case where a subject is a guest in the house of another, „for“ is used in conjunction with a conditional. Thus at his home, „Alexander’s chair“ is the chair that „is for Alexander“ whereas the place where Alexander, in the house of another, is invited as a guest to sit is „the chair that would be for Alexander“. The use of the word always implies that once we as subjects have passed away the object concerned may or will be used by someone else and that therefore the object should be looked after in a responsible manner that takes account of this. All material things that we in other languages „own“, are in Humanese, seen as being borrowed and it is our job as wardens to look after them in an appropriate manner.

In Humanese all verbs are semi-regular with variations only being introduced when adhering to a strict regularity would result in unpronounceable or ugly sounds. This semi-regularity is further interrupted when the active conditional is used. The closed conditional is used in descriptions of what has happened in the past and of what people though in the past. Person, X, would have done something had the not been afraid of certain consequences. Regardless of the truth of falsity of X’s beliefs concerning what might have happened had they carried out the action in question, the uncertainty and doubt is an indelibly part of how X saw the world at that time. X’s uncertainty and doubt are thus described as being „of X“ using the genitive case as described above and it is this that makes the doubt and uncertaintly of X something that, in the mind of the narrator, is beyond doubt. The conditional is in this sense closed. In an open or active conditional, uncertainty still lingers in the air. In Humanese, the closed conditional is communicated through the use of the semi-verb aye-e in conjunction with the infinite of the appropriate verb. Translated literally aye-e means to would to „would“ and the verb is irregular. In Humanese the persons are:

In conjunction with these persons aye-e is usually accompanied by hu so that the verb becomes huaye-e. The hu may however be detached from aye-e and inserted elsewhere in the vicinity. The verb declines:

Written in the Humanese script this results in: 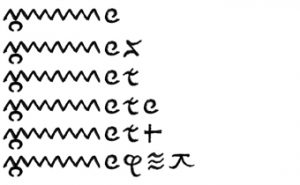 Huaye-e can however also be written as a sequence of declining hieroglyphs: 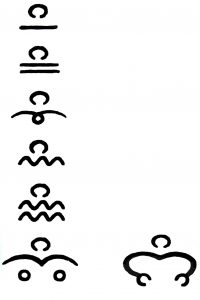 To avoid an unappealing concaternation of „h“ sounds, the „hah“ of the third person is often omitted.

Though in the case of the other persons the „hah“ is always written, for the same reason, it is not always pronounced. From the hieroglyphic, third person form of huaye-e it can be seen that the verb is actively thought of as lying behind the humanna of humanity:

In the present tense, through the first and second person plural forms of the verb in its hieroglyphic form, huaye-e shows the „wouldness“ that the verb embodies and this is continued in the hieroglyph for huason or „mission“:

Huason means „he who would have an idea“ yet it also means „he who, having an idea, would implement it“ as is shown by the word’s hieroglyph, which consists of the hieroglyph for feeling, eresa:

Combined with the hieroglyph for idea, ason:

Through this combination, „he who has a mission“ is someone who has an idea that, via the motivating forces of feeling, it is now their mission to realise and achieve. This thinking is continued in the hieroglyph for realisation, inkason, which is a parallelogram formed by joining the points of ason together:

while phonetically, inkason is derived from the stem of inkarre, to be born and ason. In this way the realisation of something is always the realisation of an idea and ideas are always associated with feelings. Effectively, „to be“ is to be one who feels and this is expressed through the word for being, ersine, which derives from eresa and its plural eresase. Being is first and foremost a matter of having feelings, the objects of feelings being ideas. This is hinted at in the regular verb, quay-a-aye, to have, which in the present tense declines:

This is written in full, queta being followed by the undulating lines of umeter in a manner that suggests that the latter flow from out of the former.

In this way, even in something supposedly „closed“ as possession, there is an indication of a flow from the realm the subject out into the external world.

The notion of flow and extrusion is further seen in the words, exona, for „horizon“ and gorzona for „eternity“. These derive from exone, „to expell“, „send out“ or „to emit“:

and gorzone „to ingest“ or „assimilate“:

Here the underlying image is that of everything in the present that is unknown being thrown out towards a distant, all-encompassing horizon. At the same time the known of the present is not preserved forever but rather is sucked inexorably towards an unknown future and pulled towards an all-consuming past. The hieroglyph for being, eresine, is thus:

In its grammar, calligraphy and hieroglyphs, Humanese is thus unashamedly metaphysical.

The conditional is expressed either through a verb’s being preceded by huaye-e ot through huaye-e being incorporated into the structure of verb itself. This can be done either by incorporating huaye-e as a whole into the structure of the verb or by breaking it up into segments which can be then inserted and appended as desired. This is done in a way that ensures that the resulting sounds are both understandable and appealing to the Humanese ear. Sometimes the „hu“ sound is omitted altogether. In this way, in what is nominally a language that has only a few irregular verbs, irregularity reappears with a vengeance.

The verb, ersame or sama, to be, declines thus:

The verb, inkarra, to invent declines:

It is from inkarra, that the word „reninkarne“ derives, this being the second person imperative of reninkarra, to reinvent, to revive, reanimate, recharge or reload something.

The verb, oia, to believe, declines:

The verb, voia, to come or arrive, declines: