After studying music in Feldkirch, the musician and composer, Martin Gut, studied classical guitar at the Music Academy in Vienna, taking in addition courses in harmonic theory and electro-acoustics. As a composer he is however self-taught. Recalling Geothe’s view that architecture is frozen music, for Gut, the Wachau Valley resonates with music and resounds with the echoes of sounds that have reverberated over centuries. 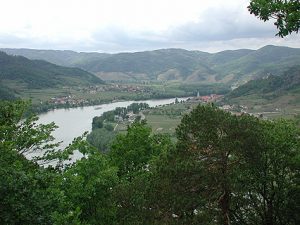 Much of Martin Gut’s music is written for an electronically amplified single stringed instrument of his own design. Historically the instrument’s ancestor is an instrument known as a tromba marina or marine trumpet, this consisted of a single string strung over a two metre long resonance chamber. Such instruments are capable of emitting rich sonorous tones and during the baroque were often used as a substitute for the trumpet, which being made of rolled metal, was a very expensive instrument. 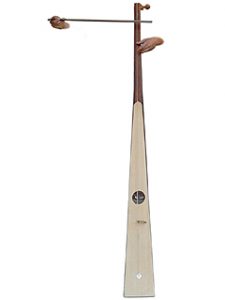 Although Gut can play the tromba marina or Trumscheit as it is known in German, he favours his electric version, which he calls an Electro-Scheit. The process by which he arrived, from classical guitar, to a single string which he generally strikes rather than plucks, was a slow process of filtering out the essences of various kinds of music that was important to him, combined with an interest in the musical-philosophical writings of Plato. Within this range of interests and concerns, the tromba marina repeatedly appeared as something that whilst in its traditional form, was not what he was looking for, in its philosophical and theoretical aspects seemed to be hinting at something. 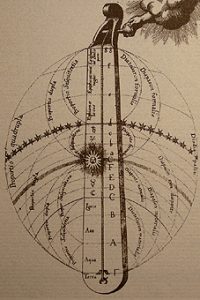 Martin Gut’s musical influences range from John Cage, Karl-Heinz Stockhausen and Derek Bailey, to folk music and Death Metal. It is to this melting pot that his theoretical considerations are then brought to bear. Apart from an interest in the music of the spheres as described by Plato and Kepler (and up-dated by the music theorist Rudolf Haase), other theoretical considerations include an interest in non-classical methods of tuning. In the case of the Electro-Scheidt, Gut’s compositions often consist of compositional units that allow and draw their final form from spontaneous improvisation as a reaction to the specific circumstances of a concert. The Electro-Scheit enables Gut to extract the overtones that otherwise lie hidden in any note produced by a conventional instrument. By playing both sides of a moveable pick-up head, the musician/composer/inventor is not only able to elicit these hidden tones but can also modulate them. The result is a series of high-pitched overtones that enigmatically meander around an underlying, much deeper pulse of ground tones. Although there are some parallels to throat or overtone singing, in throat-singing, a single ground tone is produced, whilst the singer modulates and forms a melody of overtones using a variety of techniques. The melody that results is thus a sequence of high-pitched overtones set against a deep, guttural growl. In the case of Martin Gut, two ground tones can be sustained, which whilst alternating in close temporal proximity to each other, can be far removed from one another in pitch. As a consequence of this, a complex melody of overtones (as in throat singing) cannot be played but this is not something that Gut is interested in. Rather he is interested in exploring (amongst other things) micro-tonal differences in pitch, this being something that his Electro-Scheit is perfectly designed for. Although this often results in some of the musical units he composes having meditative qualities, others are more dynamic, building up musical tensions which during the course of a composition are then resolved.

In musical tuning, what is important is that when the notes of a scale are played (regardless of whether in either ascending or descending order), the divisions should represent or intimate a sense of order. Each tone should be distinct from the other and the ratios between tones should leave a space between them that is pure, distinct and uncluttered. Equally there should be enough diversity within a system to allow variation and variety. On reaching the octave or the tonic, there should be the impression of something having been completed. Nevertheless the scale is a theoretical construction and is not a melody in itself. Accordingly the scale should have a certain rigidity to it. This gives structure and invites the invention of melodies that twist, turn and combine to make counterpoints and harmonies. Being a matter of preference, different cultures have different methods or “modes” of tuning which in turn give rise to some notes and combinations of notes being used more than others. At the beginning of the twentieth century, with their so-called “atonal music”, composers initiated a program whose aim was to avoid such structures. By paying equal attention to all the notes of the octave they sought to go beyond the hidden boundaries and confines of traditional “tonal” music. Martin Gut’s Electro-Scheit compositions are however not so much intent on transcending or going beyond boundaries as revealing the repertoire of potential music that is inherent in any note struck. His program is not therefore a modernist program like atonal music but rather is a return back to the beginning, back to the first resonance’s with which music and perhaps the world began.

This return back to the origins of music enables him to “see” and hear the world anew, opening up fresh avenues within more conventional fields of musical expression. In this way Martin Gut’s interest in non-classical methods of tuning music, far from being purely theoretical, is practical and a composition written for guitar to accompany a Classic Greek poem by Alexander Curtis uses, for example, a tetrachordal system of tuning. 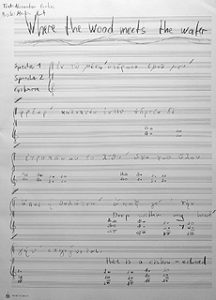 Here, both in the text and in the music, revitalisation is drawn by returning to the hidden depths that each of us carries within us but of which we are only sometimes aware. 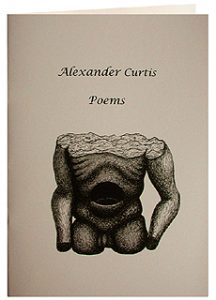 An important vehicle for the expression and realisation of this conception of music is Gut’s ensemble Brennstein in which the composer is joined by Günther Gessert, playing marxophone and theremine and Gabriele Teufner who plays flute and saxophone. 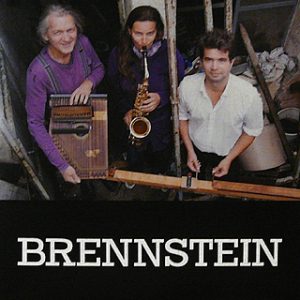 Brennstein’s first CD „Brennstein“, begins with a futurist manifesto in which a radically new architecture of music and space is announced. The typically modernist message of dazzling newness that solves all problems, is however, repeatedly subjected to „technical problems“ which soon enough lead to the promised concert of unrepentant modernity being cancelled. Hesitant and uncertain, notes slowly begin to sound their way out of the embarrassed silence. Step by step, a new form of confidence is won and from the assertive rhythms of the Electro-Scheit, tones and overtones are engendered, followed by melodic fragments, extrapolated by Gabi Teubner and Gunter Gesset. Often taking centre stage, these meander between the hauntingly melodic and the overtly futurist. Not so much pieces stolen from out of the fictive firmament of a futurist heaven, these studies are gleaned from an out-of-orbit planet that, losing its way, has stumbled upon a deeper lying reality that baffles and mesmerises. As announced in the manifesto, a new architecture of sound and space is introduced and yet this is repeatedly interrupted by an anarchist, cabaret style jingle for something that calls itself a „Molatoff Cocktail“ and whose explosive reality is only revealed towards the end of the CD. 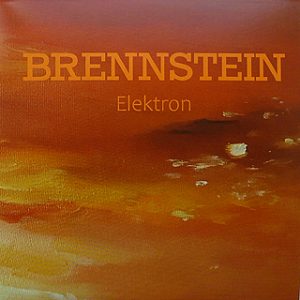 „Brennstein“ is a variation of „Bernstein“ which is the German word for „amber“ and Brennstein’s new CD is entitled „Electron“ which in turn is the Ancient Greek word for amber. As when rubbed, amber generates a static charge, it is from „electron“ that the word „electricity“ derives. After a jaunty love-song, Clear Water, the ensemble’s second CD introduces a series of micro-tonal filigrees and poly-rhythmic experiments that are combined with fragmentary phrases that awake fleeting impressions of lost music from a dim and distant past. And yet this is offset by an overriding conviction that this is a music that looks forward to what could be and must be, with past and future being a linked web of tangled threads which Brennstein has miraculously tapped into. In this series of hauntingly beautiful, mesmerising studies, Brennstein show that a clear focus on formal problems and the working towards solutions thereof, can lead to new ways of thought, feeling and being.

Martin Theodor Gut’s music is important and relevant to our times as instead of focusing on what is (as in a modernist program), or on what was (as in a historicist program), he combines what is and was, with glimpses of what could be.