Alexander Harry Curtis is an artist and philosopher. Originally from Britain he has been living in Austria since his mid-twenties. After many years in Vienna, he moved to the small town of Stein on the northern banks of the River Danube where he lives in an old house below the crumbling remains of the town’s western defences. 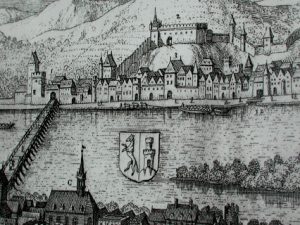 Back in the Eighties, soon after beginning a course of study at Edinburgh College of Art he was drawn to philosophy and was particularly interested in the philosophy of science and mathematics and how the phenomenon of mind is to be accounted for in a materialist explanation of the world. After two years, realising that a life in academia was not for him and having in any case found the answers to the questions in philosophy that he had been asking, he decided to resume his artistic activities. Moving to Vienna, he wrote, made films and worked in a museum as an art director. As part of a DVD project, he designed a paper model of the Venus of Willendorf (see „From Message to Figure“ on the Reloading Humanism Mission Page). This famous prehistoric statuette was found just twenty kilometres upstream from where he now lives. 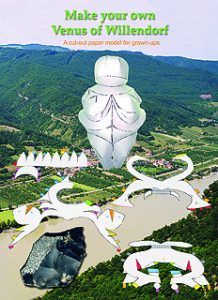 Of crucial importance, over the years Alexander Curtis always found time to keep up his interests in science, archaeology and the anthropology of human origins. Learning Classical Greek, he found himself drawn back to the philosophical problems of his youth, whose answers, though formulated back then, he had never committed to writing or worked out in detail. Order at the Heart of Chaos: Life and Consciousness in an Exploding Universe presents these and a number of later ideas in the form of a stop-check of scientific materialism. Aimed at the general reader, interested in the big questions of life, it follows step by step – both scientifically and philosophically – the emergence of life and the beginnings of consciousness. The so-called “body/mind problem” is found to be of central importance, as any answer we give dictates how we see ourselves and our place and role in the world. In a way that is similar to Alain de Botton’s examining works of literature and asking whether they might have anything to tell us about how we should live our lives, Alexander Curtis is also concerned with seeing whether, in his stop-check survey, any guidelines for living can be discerned. Philosophically, although Alexander Curtis’ ultimate position is highly pragmatic and can be linked up to the tradition of American Pragmatism, its deeper roots are formed from his understanding of the work of Parmenides and Plato so that it would be more correct to speak of a tradition of “European Pragmatism”. Following Sir Karl Popper, Curtis sees these two philosophers as laying the foundations of what was to become the western scientific tradition. Although both were at the cutting edge of scientific developments in the Greek world, over the ages, the academic tradition that has appropriated for itself the task of disseminating their work has become increasingly far removed from much of what the scientific endeavour is about. Equally, geometry lies at the heart of a major part of Plato’s philosophy, yet of his commentators, few have spent time with a ruler and compass in their hands. Similarly, discussions with the musician and composer, Martin Theodor Gut, on the music of the spheres in Plato and on the teachings of the Pythagorean’s have lead, not only to enhanced understanding but to the development of a series of musically illustrated lectures on Plato. The hands on, nuts and bolts approach brought to bear on the understanding of Plato’s metaphysics yields dividends and a number of highly important questions have been answered. After ten years of working as an art director and product designer and having realised a number of DVD film productions, Curtis returned to his roots as a sculptor in 2010. Investigating the contemporary art scene in Vienna he can only agree with the utterly damming conclusions drawn by Hanno Rauterberg in his And that’s Art? – A Quality Check. Unfortunately not available in English, the forces identified by Rauterberg that currently manipulate the art market and which constitute a major part of the problem, are the subject of Ben Lewis’ documentary film The Great Contemporary Art Bubble. By re-instating the viewer as an active agent in the appreciation of art, Rauterberg is able to offer something of a way out of the dilemma. Here the qualifications that must be made concerning this hope, reflect the spurious authority that has been so blithely handed over to the art world concerning what is and is not art and the reluctance that can be counted on when theorists and critics are called upon to renounce their roles as the self-appointed arbitrators of what, in their view, the viewer must and must not accept. Meanwhile the way that people with no actual artistic ability can bluster and bluff their way into becoming accepted as artists is masterfully skewered by Banksy in his film, Exit through the Gift Shop. In Order at the Heart of Chaos, Alexander Curtis introduces chaos theory in some detail and despite its abstract nature, it was chaos theory that alerted the author to the terrifying way in which ecosystems can so easily be tipped out of balance. With respect to the human food chain, this can result in calamities such as a failure of the grain harvest across a whole continent. On five different occasions, nearly all life on Earth has been wiped out and evolution has started anew. The sixth mass extinction is however no longer a theoretical construct; it has already begun. Initiated by no one other than ourselves, like climate change, via the mechanisms of chaos theory, defaunation has the capacity to render us extinct in 100 to 150 years if nothing is done to stop it. Both global warming and defaunation are driven by consumer culture and by the forces of childishly irresponsible, unbridled capitalism and in his book, What is at Stake, Philipp Blom analyses the mechanisms that lie behind consumer culture and why it has us so firmly in its grasp. This Blom finds, takes place through our emotionally buying into something that is “transcendent”, in that it expresses or promises something that lies over and above us. That which is transcendent can be a god, a saint or a branded item of merchandise. Blom’s analysis has parallels with the notion of truth as something that is revealed articulated by Curtis in his Sun and Moon: the Abstraction of Time and the Birth of Philosophy. As both models are general case scenarios applicable to all cultures, there is for Blom, the hope that we might be able swing our current habits and aspirations round towards something more sustainable and adopt ideals that will result in behaviour that will not destroy the ecosystems of which we are a part and on which we are completely and utterly dependent. For all our technology, our evolutionary niche is that of the Neolithic farmer and we are as dependent on the growing of crops as we were 12,000 years ago. Taking Blom’s cautious optimism out into the practical world of daily life and making a living, is Bernhard Kaar, who together with his wife, runs a business in Dürnstein, the next larger settlement on the Danube up river from Stein. A biologist, Kaar’s life was changed by a story he heard that involved saffron. Kaar’s story shows how the natural world has the capacity to mould and shape both human culture and individual lives. Learning from the plant that they farm and process, the Kaar family endeavours to implement principles that are not just about profit but which also include a genuine and sincere respect for the environment and the people – employees and customers – whose interest and enthusiasm it is, that ultimately make the business work. The Kaar family business can thus be seen as an example of the way that capitalism can be changed from within and reconnected with the values with which it was originally endowed, this being the strategy for a sustainable future without exploitation proposed by the social philosopher and economist Lisa Herzog.

For the changes that took place during the Renaissance, reading was immensely important and has been for western culture ever since. Although more books are being printed now than ever before (both in terms of titles produced and in terms of volumes printed) there are nevertheless good grounds for fearing that the abilities of people to read deeply and to subject texts to critical analysis are being eroded through the overuse of digital technology. These concerns, articulated by Maryanne Wolf, are not only a grave threat to democracy, they also numb our wilingness to address the world’s environmental problems and to stop the injustice and exploitation caused by globalisation and unregulated capitalism. 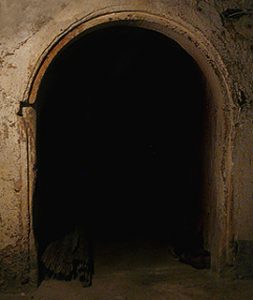 In view of his advocating a return to a more Renaissance view of man and his place in the world it is appropriate that Alexander Curtis should live in a house that features a Renaissance arch, while in the woods above the house there is a Renaissance house called Scheibenhof. Here, in 1570, the first copies of a Protestant agenda of service were printed. This was an important document for Protestants living in the Habsburg Empire and the printing of the book can be seen as the climax of the Protestant movement in Austria. During this period much of the Wachau and many of the people living in Krems and Stein were Protestant. Coupled with this is the fact that the second half of the sixteenth century was also the period during which the two towns were at their most influencial and prosperous. In retrospect one can therefore see the circumstances under which The Agenda was printed as a portent of the turmoil that the later decades were to bring. 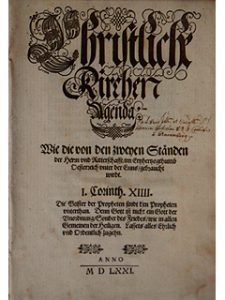 Written in 1569 by David Chyträus in Spitz (some 15 Kilometres up river from Krems and Stein), The Agenda was only granted imperial approval after it had been worked over by Christoph Reuter who some years before had bought Scheibenhof and converted it into a Renaissance villa. To avoid upsetting the Catholic fraternity at Court, the Emperor’s sanction was never officially announced and permission to print was given on the condition that the work be carried out in a secret, out of the way place. As Scheibenhof appeared to fit the bill, this was where the first copies of The Agenda were printed. 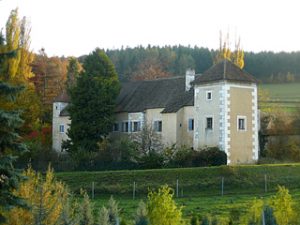 Not as secluded as had been hoped, word leaked out that something subversive was going on and whilst Emperor Maximillian II (1527-1576) was away, the printer and his assistants were arrested and imprisioned. Though the matter was later clarified, the operation was transfered to the more remote location of Rosenburg and printing resumed in 1571. Although both Maximillian and his successor, Rudolf II (1552-1612) had Protestant sympathies, this was not shared by Rudolf’s brothers who worked hard at inaugurating and promoting the Counter-Reformation in Bohemia, Hungry and Lower Austria. In 1589, the citizens of Krems and Stein were urged to return to the Catholic faith but in an act of open defiance refused. For this, the various trading privileges that the two towns had enjoyed for over a hundred years were taken away. As a consequence, many protestants left and prosperity plummeted. After Rudolf’s death in 1612, his brother and successor, Emperor Mathias (1557-1619), relented and in 1615 restored the trading privileges that had been so important for the prosperity of Krems and Stein. Yet three years later, the Thirty Years’ War (1618-1648) broke out and the downward spiral continued. Meanwhile in the woods above the house where Alexander Curtis lives, there are the remains of fortifications and military camps that date from the Thirty Years War and it was during this period that the castle above the house was destroyed by Swedish troops.