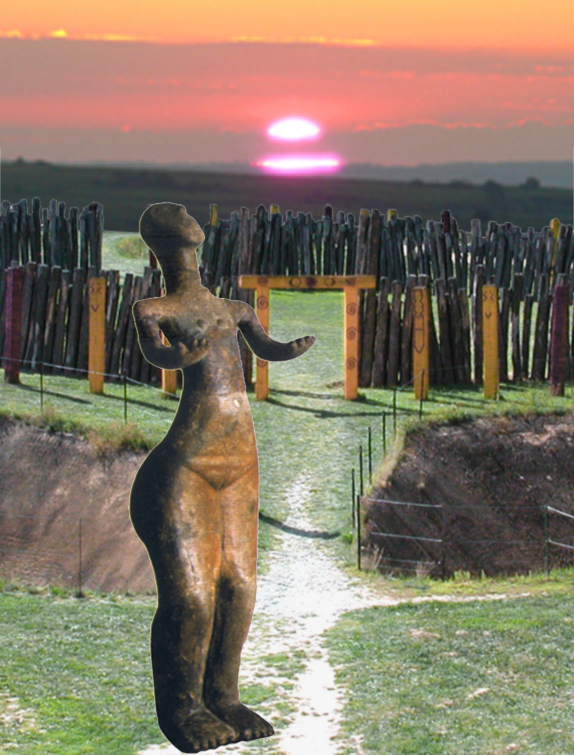 The Neolithic or „new stone age“ was the age in human history during which farming was taken up and a sedentary style of life was adopted. Originating in the Near East, farming is reckoned to have begun around 9,000 BC so that between 8,000 and 5,000 BC, it had spread through into modern day Turkey. During this period, the new sedentary culture slowly replaced the older way of life. Settlements at that time had populations of between one to two hundred people, with the majority being directly involved in agriculture, hunting and gathering. Contrary to what one might expect, the transition did not result in less work and increased health. Crops were labour intensive and animal husbandry exposed humans to new diseases. Although with the end of the Ice Age, the Danube’s meandering’s were curbed, it was still free to meander on an impressive scale, so that ten thousand years after the Gravette, for Neolithic farmers, much of the Wagram flood-plain will have been a less than attractive wet-land landscape. Yet for a short stretch after the Hohewand, the river flows straight and it is only after Mautern on the one side and at Stein on the other, that the dynamics of fluid mechanics allow the Danube to start meandering. This means that, sandwiched between the Waldviertel Plateaux and the river, a slightly elevated area on the outskirts of Stein falls outwith the meander-zone and towards the end of the Neolithic, it was here that a settlement was established. This was discovered in 1928 when houses were built for workers of the Austrian Tobacco Factory. As earlier Neolithic sites in the region are situated further inland, it would seem to be that, as not prime farming land, the site at Stein was settled at a later date due to a rise in population. The excavations carried out prior to building uncovered Neolithic stone axes, colourfully glazed sherds of pottery to light and the fragment of a clay figurine that is now on display in Museum Krems.

These belong to the „Lengyel Culture“, characteristic of which are female statuettes that address a theme and that was undoubtedly of great significance to Neolithic farming peoples.

This involves invocations addressed to a sky god to bless the earth goddess, whose body is the Earth, with rain so to make the corn grown. A Czech example found at Hluboké Masuvky shows how the Krems statuette may well have looked. Here, the life-giving rain is seen as being the equivalent of what an earthly male contributes to the reproductive process and implies that the role of the male in reproduction was not fully understood.

With the Neolithic and the ushering in of a new way of life, a more precise way of measuring time was needed and instead of the waxing and waning moon, the sun was taken as a guide. Not only was the sun’s daily path through the sky followed but also its yearly trek from South to North and back again. To this effect, during the Neolithic, all over central and northern Europe, monuments known as enclosures were built, a part of whose function and purpose was to pin-point the rising’s and setting’s of the sun at certain times of the year. Enclosures were a feature of the Lengyel Culture and in Lower Austria generally date from between 5,500 and 4,800 BC. So far, 46 examples have been identified in the region, with those at Schiltern, Straß in Straßertale and Plank am Kamp all being close to Krems. Also in Lower Austria is the reconstruction in Heldenberg of an enclosure at Scheltz.

Characterised by a surrounding ditch with steep sides and a number of causeways, which offer access to a central „island“, enclosures were built close to settlements so that there is good reason to assume that in the vicinity of Dr. Karl Dorrek Strasse 21, there will have also been an enclosure. 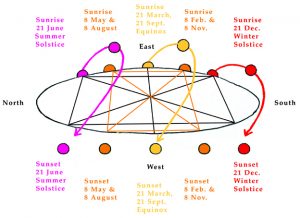 In an enclosure, the causeways of are nearly always at least two in number and where there are two, they are always, either exactly or, as at Schiltern, approximately oppose each other. Often however there are four causeways. Inside the ditch, the island was screened off from view by one or two wooden palisades. In several cases, the orientation of the gateways and the axis of the structures as a whole lines up with the direction of the rising sun on the day of the winter or the summer solstice. In other cases, the orientation is in line with the rising and setting of the sun on the four days that lie more or less exactly between the winter and summer solstices and the equinoxes. These are the days at the beginning of February, May, August and November. At the beginning of February, the corn will have been sown out. Where the beginning of May marked the start of summer, the beginning of August inaugurated the harvest season, while the beginning of November signified the beginning of winter. Together with the solstices and equinoxes, this implies a division of the year into eight in a way that structures the farming year in a practical and hands-on manner.

At Stein, the settlement’s enclosure may have been directly opposite Dr. Karl Dorrek Strasse 21 on the site of the former Austria Tobacco Factory (which is now the Danube University) or it may have up on the hill behind the settlement. This latter location offers a panoramic view of the surrounding landscape. On the day of the summer solstice the sun rises over a plateau laying out a carpet of rose fingered light over the plateau before it ascends into the sky. 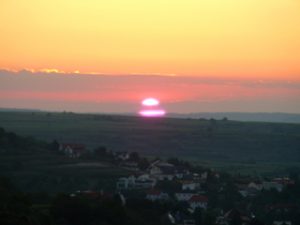 Then in the evening it sets behind the summit of a hill known as the Braunsdorfer, slightly North of the Danube Outlook Tower that built on the top of the hill. 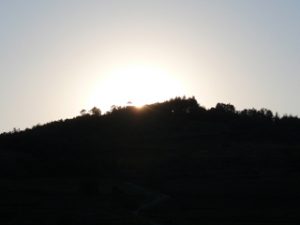 Another date that the landscape helps to pin-point is the beginning of February when on the 2nd February the sun rises at the point marked by the prominent and steep rise on which Weather Cross Chapel now stands. 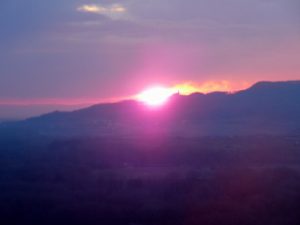 Seeing the world this way turns the landscape into an embodiment of the calendar with the times of when to reap and when to sow being marked out by the sun as it rises and sets below the horizon. Nevertheless it should be remembered that this was only one of a number of functions of an enclosure and there is much that is not know and which may never be known about how enclosures were used and what rituals, ceremonies and occasions were celebrated in and around them.