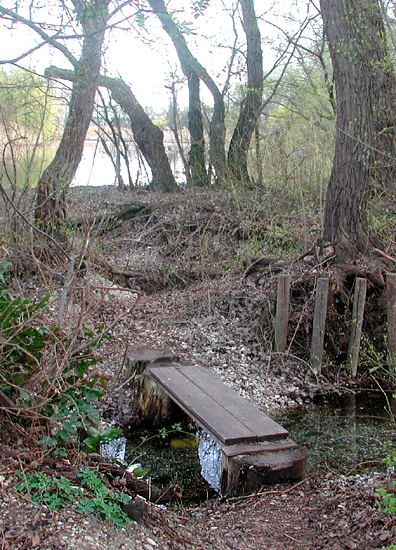 During the Ice Age, the Wachau was a corridor of milder climate sandwiched between the ice-encrusted mountains of the Alps and the Bohemian Massive. In the sheltered valleys on the south-facing northern banks, small trees grew. Sheltered from the wind and catching the sun whenever it shone, over the millennia, groups of hunter-gatherers repeatedly returned to camp on the northern slopes. Thousands of years later, the permafrost thawed and the landscape of snow and ice gave way to a new environment. Meandering over its flood plain, the Danube brought into being a plethora of islands, ox bow lakes, marshy patches and bogs. For ten thousand years these appear to have been left largely undisturbed and even for the Romans, the River Danube was first and foremost a boundary. Thus the first people to settle permanently on the river’s northern banks were a people known as Slavs, who from the later years of the Roman Empire up until the tenth century AD, lived in small hill-top settlements that overlooked the river and its wetland landscape. Driven away by invading Magyars, the Slavs never returned. Pressing on into southern Germany, the Magyars were defeated at the Battle of Lechfeld by the soon to be Holy Roman Emperor, Otto III, who in 995 AD, immediately after the battle, initiated a program of settlement throughout the valley, allocating large areas of land in the Wachau to monasteries in Germany for farming and cultivation. In this way, over a relatively short period of time, the valley was colonised and all traces of the Slavs disappeared. 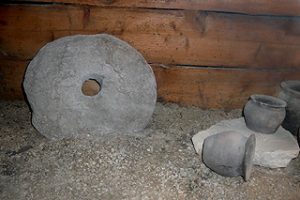 As new monasteries were founded, communities arose around them and outlook towers were built so that the alarm could be raised whenever bands of brigands or the troops of marauding armies were sighted. It was from such a tower that the Wachau received its name, for the word is an abbreviation for die Wache in der Au or, „the watch tower in the marshes“. 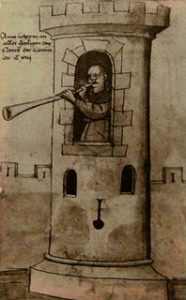 In this way, the landscape was colonised and stability was established in the region. Over the course of hundreds of years, a unique patchwork of terraces emerged, on which wine, saffron and apricots were grown. In this slowly evolving landscape, the Danube remained unchanged. Uncontrolled and uncontrollable, it meandered this way and that over its floodplain. Then, with the introduction of steam shipping in the middle of the Nineteenth Century, over the course of a few decades, the river was regulated, with all that was awkward and irregular being removed. Of the Danube as a convoluted river with a host of wooded and marshy islands, today only a few short segments remain. One such is situated on the bend between Rossatz and Dürnstein where there are two islands, known as Pritzenau and Venedigerau or “Pritzen Marsh” and „The Venetian Marsh“. 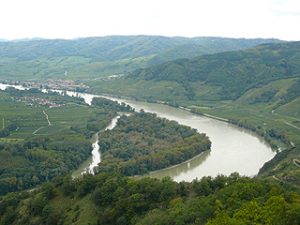 Similarly, once numerous and extensive, regularly flooded areas of woodland, dotted with ponds and patches of marsh and bog, are now scarce and limited in size. 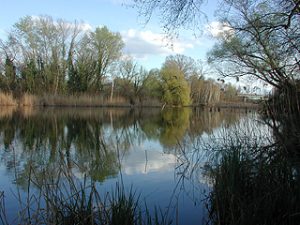 Yet just as this old Danube was beginning to die, an awareness came into being that humankind had a history that extended much further back than the six-thousand-odd years that could be reconstructed from the Bible. Stone tools found in gravel pits in Belgium suddenly began to point at a past that, whilst palpable and distinct, was also abstract and distant. Then on a sunny day in August, 1908, in the heart of the area originally known as „die Wache in der Au“, an effigy was found that though faceless, gave a face to humankind’s dim and distant past. This was the Venus of Willendorf, a pocket-sized masterpiece, carved from limestone some thirty-thousand years ago. Known the world over, the figurine is seen as embodying and expressing all manner of ideas, principles and world-views and has been a source of debate ever since it was first unveiled at the Berlin Anthropological Congress in 1909. 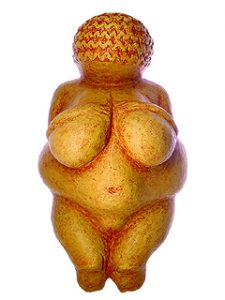 Where the original lies behind high-security glass in the Museum of Natural History in Vienna, the place where she was found in Willendorf, is marked by an enlarged version of the figure rendered in artificial stone. Raised to eye level and standing on a substantial stone pedestal, the statue overlooks the river and appears to be guarding or protecting something in a manner that recalls the original Wache in der Au. 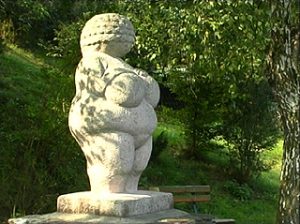 This impression is reinforced by the iron chains that, suspended from short stubby columns, enclose the monument. 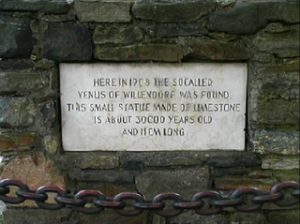 In Willendorf, a small museum gives a brief introduction to life during the Upper Palaeolithic and draws attention to the difficulty of trying to find out how a carved piece of stone fitted into the rhythms of life as lived by people thirty-thousand years ago. Here the implication is that there is an indelibly fixed boundary to what can be known about the past, with the curators of the exhibition drawing the line at scientific methods of physical analysis combined with a few well-established insights drawn from anthropology. Yet looking more closely, one can go further. This is possible when in addition to science and anthropology, methods of analysis are used that derive from art history. The importance of this is that for far too long, western scientific materialism has continuously denied and played down the fact that we do have an inner dimension. This in turn plays down the fact that ideas, ideals and inner values are not only important but are essential and moreover can change history. Thus at Reloading Humanism, the Venus of Willendorf is seen as a reminder and an invocation that if we are to have a future, we must not only know where we have come from and where we are going but also, looking within, we must know who we, as individuals, are. To this effect, the statue made in 1978 that marks the spot where the figurine was found, can be seen as a new „watcher in the marsh“. Looking over the floodplain, we should imagine her as guarding the inner world of the self, that place where, if we are to have a future on this planet, a new set of ideals must be forged in each and every one of us.